What people say about Centre for Social Intelligence

Testimonials and references from clients and colleagues.

I have had the good fortune over the past year to work with Kelly Cooper, founder and president of the Centre for Social Intelligence, to collaborate on an initiative to foster gender equity in the Forestry Sector. This innovative project is Canada’s first public-private funded national gender equity project, and is largely the result of Kelly’s vision, tenacity and her ability to bring others on board with that vision. The initiative aims to create a diverse and inclusive work force to ensure a thriving Canadian forest sector into the future.

The project for gender equality in the forest sector is breaking exciting new ground. This initiative of the Centre for Social Intelligence together with the Canadian Institute of Forestry, is bringing together industry, government, indigenous organizations, academia, and NGOs to promote the advancement of women in the industry. It’s a fantastic partnership model that I hope will be emulated by other sectors of the economy and within individual communities. Hats off to Kelly Cooper and the CSI!

– Michael Kaufman, Founding member of White Ribbon and author of “The Time Has Come. Why Men Must Join the Gender Equality Revolution.”

We are proud to be the FIRST! The Centre for Social Intelligence worked with Tolko to conduct a gender equality audit to assess where we stand compared to the Edge certification standard. Tolko is the first natural resource company in Canada to undertake the gender equality gap audit. Thank you Kelly Cooper.

Kelly focuses on the challenge at hand, strengthening teams to achieve solid outcomes.”

In my work with Kelly, I have appreciated her ability to bring a well-rounded package of skills to the table — a strategic perspective, a ‘get things done’ attitude, and a strongly collaborative approach. In a national project with multiple stakeholders and project partners, her passion for the outcomes along with her straightforward style and open communication have helped to gain commitment and create new opportunities for the project to have an even greater impact.”

I met Kelly Cooper doing a three day facilitation course I was teaching in Ontario. I teach to dozens of people weekly and I will never forget her! Kelly brings a high level of energy and enthusiasm wherever she goes. Her participation is thoughtful and her comments are insightful. She interacts extremely well with others and was a pleasure to have in my class. She elevated the group in wonderful ways. I would collaborate with her again anytime! ”

Kelly has the uncanny ability to look at a situation using two seemingly conflicting perspectives, yet in the end, marry them together for added value. When faced with a problem, she is able to look past the extraneous information and pinpoint the core components of that problem. Once she is clear on those core components, she examines the supposedly extraneous information, to better understand the context within which that problem lies. It is this comprehensive perspective that makes working with Kelly so very rewarding. ”

I met Kelly in September 2015. We attended training together. Kelly’s persona stood out immediately in the group. Confident, smart, strong but yet extremely approachable. I had the opportunity to spend some one on one time with Kelly and quickly discovered she is an amazing listener. Although I had just met her, Kelly’s approachability and open personality made me confide in her with regards to some business decisions I was facing. She was able to walk me through my options so logically and drive a decision out of something I had been toying with for many months. Kelly is results oriented, motivated, enthusiastic, logical but also approachable. It’s easy to be around Kelly which is an important trait in business.”

I first met Ms. Cooper in Mexico City where she was part of a team facilitating a NAFTA-CEC meeting on North American GHG trading development. Several years later while still working with Ontario Power Generation, I collaborated with the Canadian Department of Foreign Affairs & International Trade, on developing ways of influencing developing countries to sign on to the Kyoto Protocol. Kelly had been seconded from International Institute for Sustainable Development to Tata Energy Research Institute in New Delhi. I contracted her to seek out potential agricultural sustainable development opportunities in India, which could have quantifiable greenhouse gas benefits. Kelly and her associates developed a DC solar irrigation partnership project that would support local sustenance agriculture, and reduce demand for expanding coal-fired electricity generation capacity. Ms. Cooper effectively managed the project & stakeholder relations, and developed a draft quantification & assurance protocol for Clean Air Canada Inc review and UNCTAD attention. The project was brought to TERI President’s (Dr. Rajendra Pachauri’s) attention as an illustration of the types of project & project financing benefits to India of joining Kyoto and participating in the then-proposed Clean Development Mechanism. (India did join Kyoto)
I have been very impressed with Kelly’s initiative, strategic thinking, attention to detail, interpersonal skills in multicultural settings, and creativity. In fact she developed a very novel idea for a Clean Adaptation Fund. It has been a true pleasure to work with Kelly, and I hope we have the opportunity to do so again in the future.”

CSI and Canadian Institute of Forestry 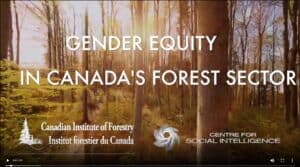 What is a Gender Gap Audit?

Not sure if a Gender Gap Audit makes sense for your organization? Download our free Gender Gap Audit Guide that explains what the audit is and why it’s a great starting point towards a Gender Equitable workplace.